January 2021 was the Lowest Month on Record for New Insolvencies

There were 192 new appointments in January, made up of 134 Creditors wind-ups, 25 Voluntary Administrations, 18 Receiver manager appointments, 9 Controllers and 6 Court wind-ups.

January is traditionally the slowest month for corporate insolvencies, mostly because the courts are closed which keeps the number of court wind-ups to a minimum.

January 2021 being the slowest on record comes as a surprise because the month also marks the removal of the Insolvent Trading moratorium, the change back to 21 day statutory demands (from 6 months) to allow court liquidations and the introduction of the new small business insolvency processes. Many predicted January to be the start of a large wave of new insolvency appointments for these reasons. We think the wave may start when JobKeeper payments end in April 2021, but even then it may not arrive in full until the ATO start pursuing unpaid tax in earnest.

Brad Vincent
Brad is the Senior Advisor at Dissolve. After 10 years of being an advisor, Brad has developed an excellent understanding of the legal and practical issues facing a director of an insolvent company – it is rare for a director to throw a new situation at Brad. You will find him understanding and sympathetic, but above all practical. Brad will provide the cool head in a stressful situation.
« Previous Article
Related Articles
Privacy Policy | Terms and Conditions
Google Privacy Policy | Terms of Service
Copyright © 2018 Dissolve. All Rights Reserved.
Liability limited by a scheme approved under Professional Standards Legislation 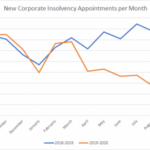